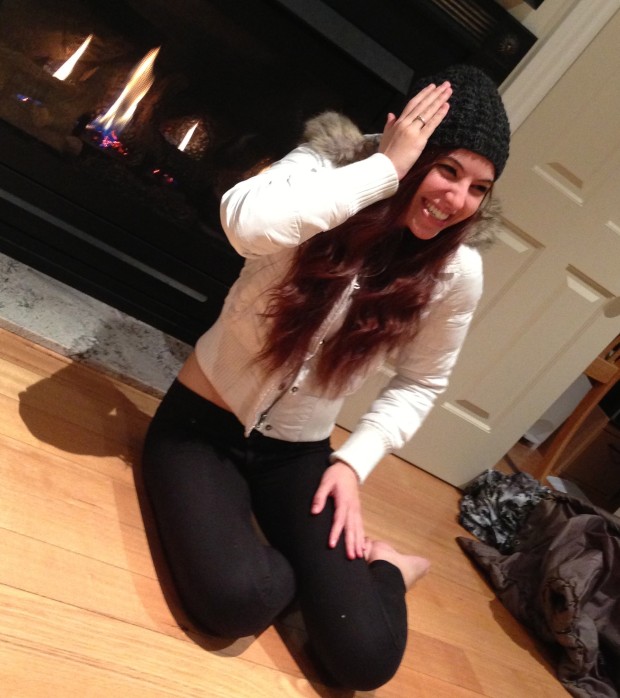 I had a wonderful week this week. I was at Bunnings when  I saw a nice tool set on sale, so I bought it as an early birthday present to myself. I’ve always wanted my own tool set, and I am very happy that I will no longer need to run home to steal Dad’s. 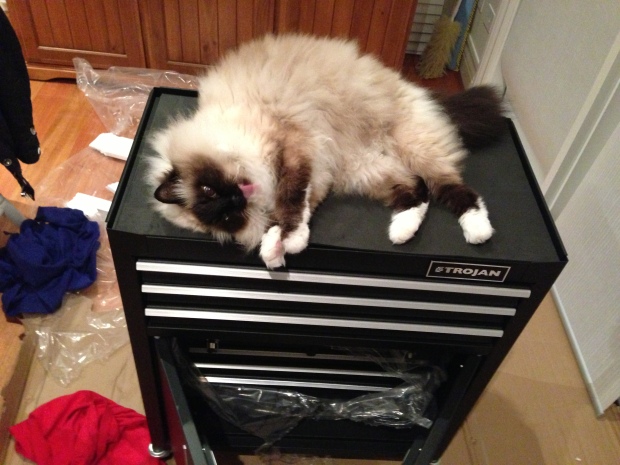 I also managed to find what I went there for in the first place – a box to store my many crafty bits and pieces in. At $20 I think it was a bit of a bargain. I <3 Bunnings. 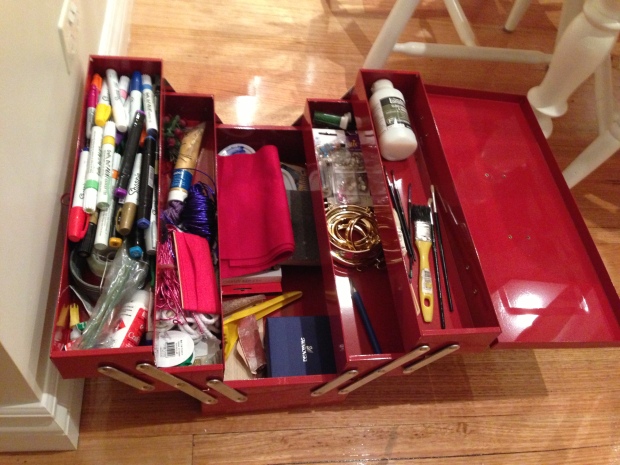 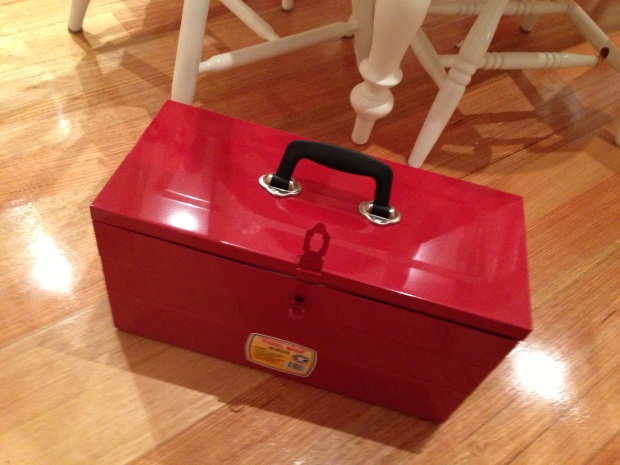 Anyway, on to this week’s project – a nice warm woolly beanie. The pattern I used was this one from Ravelry,  but I made a few changes. By the way, have you knitters out there visited Ravelry? It’s got some fantastic projects. This beanie was super quick and easy to knit up, it took me only a few days. You’ll need to be able to knit, purl and decrease, that’s it!

You only need a couple of bits and pieces to get started. 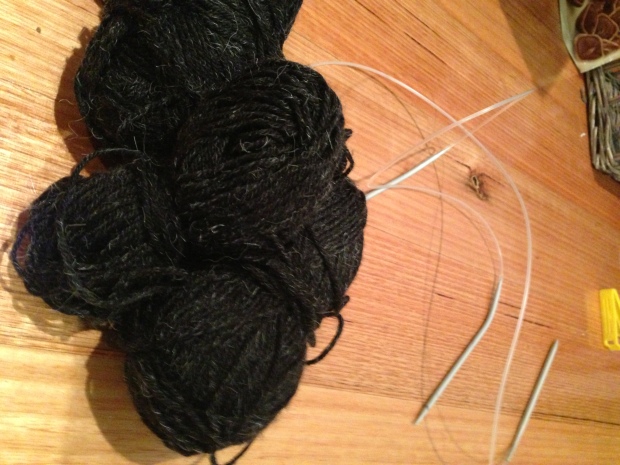 I cast on 105 stitches, as the pattern instructed, but instead of 6 rows of rib, I did  8. It felt much too short otherwise. If you are knitting in the round for the first time on double pointed needles, you divide the stitches by three and cast on evenly over three needles. Keep the joins as tight as possible. The fourth needle is what you use to knit with. 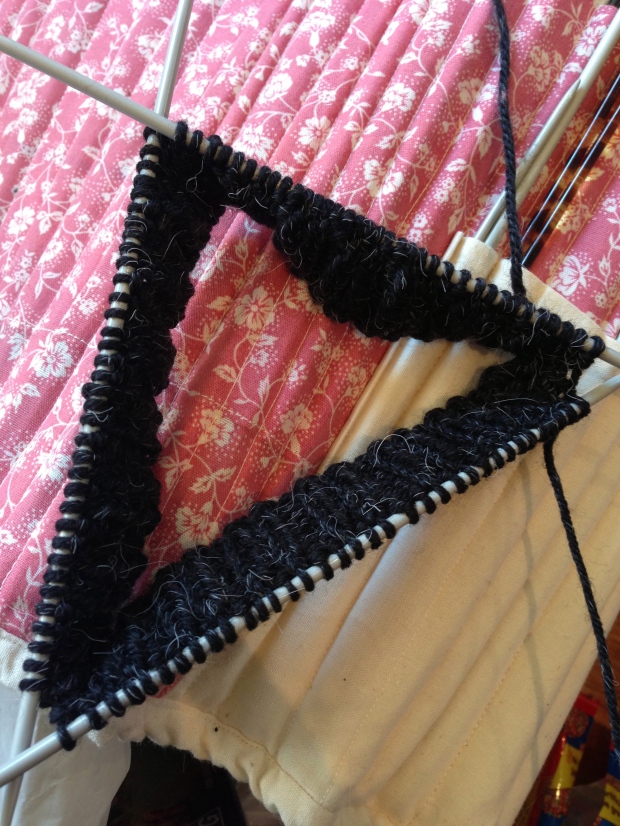 I don’t know what the stitch in the next part of the pattern is called – it’s 2 rounds of purl followed by three rounds of purl 2, knit 3 repeated. It’s kinda sorta like a basketweave, but not quite. I’ve seen it described as check stitch, but I don’t know if that’s correct. Anyone have the answer?

Anyway, I did my basketweave-like stitch for 50 rounds, until the work measured 18cm or 7 and a bit inches. This was quite a bit longer than the pattern suggested, but I’m very glad I added the extra length. 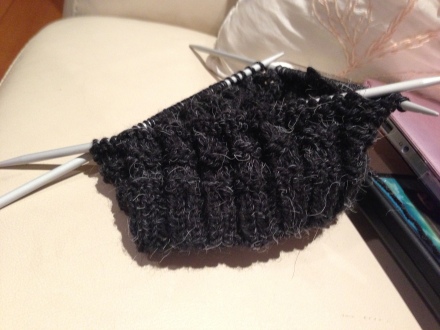 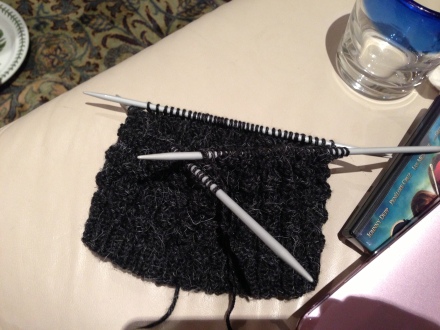 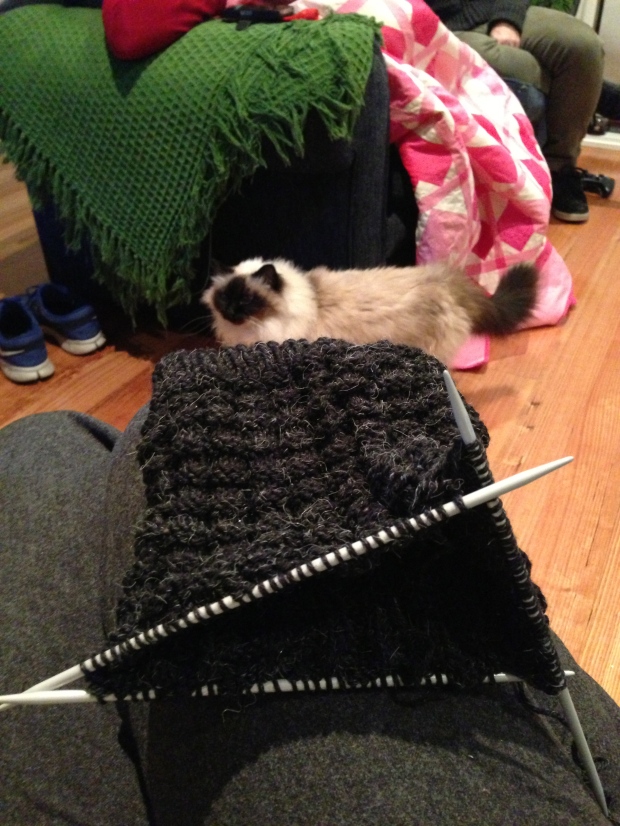 This photo was really of Lara. The beanie is a guest star.

Finishing it off per the pattern was very quick and easy – it’s always my favorite part of knitting in the round, as the stitches start to decrease and everything gets faster. I sewed the end of the wool into the inside of the top of the hat, and voilà! 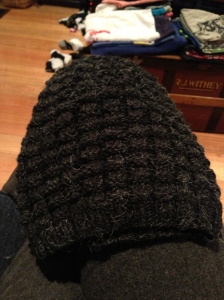 And here are my wonderful beanie models showing just how fun it can be to have your own beanie (and wear it)!

Finally, and just as an aside, because we all know how political these craft blogs can get (wait, really?), you may have noticed the furor this week when photos emerged of our now-ex Prime Minister, Julia Gillard, with her knitting needles in hand, whipping something up for the royal bub. Criticisms ranged from the obvious (she was taking time out of running the country to put on a staged photo shoot), to the absurd (she was sending mixed messaged, on account of her previous fiery attacks against misogyny). To put my two cents in, Julia Gillard ACTUALLY knits, so the photo wasn’t staged any more than a magazine photo shoot usually is (which is to say, quite a bit). But furthermore, knitting, or any other crafty hobby, HAS NOTHING TO DO WITH HATING MISOGYNY OR BEING A FEMINIST. Do these uninformed commentators believe there’s no such thing as a feminist who enjoys knitting, sewing, cooking, keeping a house, or any other “traditionally feminine” task? Do they think that liking knitting means a women is OK with being denigrated and degraded by male counterparts? Well I will call them out, because I love to knit, and I am a feminist. You can be a feminist and knit. You can be a 1950’s housewife wife and knit, or, like Russell Crowe here, you can be a modern(ish) man and knit. You can be white, black, gay, straight, old, young. You can even be a politician. Knitting, my friends, is for everyone. 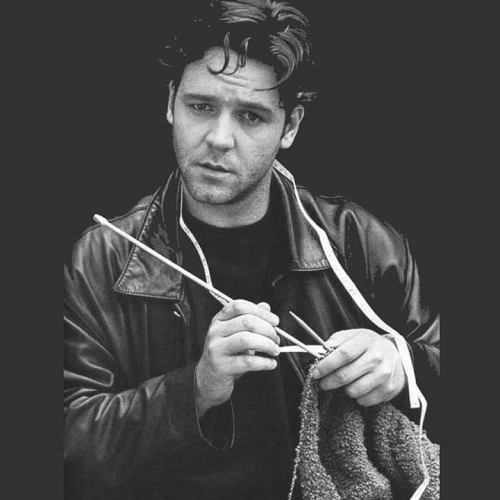 Fly your knitting flag high Russell. Although I’m not too sure what you’re doing with that needle there.

2 thoughts on “Knitting is for Everyone” 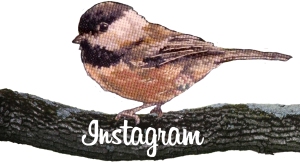