For me, the decision to DIY was an easy one – I’d seen my best friend do the flowers for her mum’s wedding, and they looked amazing, plus they were really economical. Anything that saved me money in the wedding planning process was a no brainer. Plus, it was just one more thing that I could exert my ever-increasing need for control over (yes, I know I have a problem).

To help you decide if doing your own wedding reception flowers is a good option for you, I have put together a handy flow chart, with some very important questions. 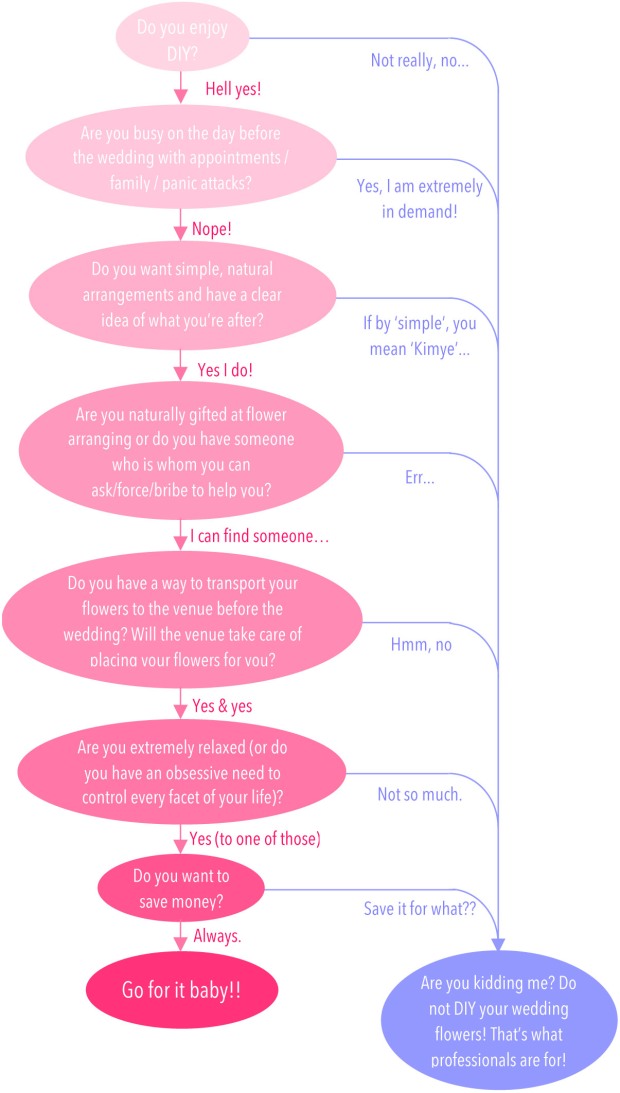 On a (slightly) more serious note, here is the process that I went through to D.I.Y. the flowers for my wedding reception.

The first step was coming up with some inspiration for my flowers. As usual, Pinterest was my first call. I knew I wanted Australian natives, as they have a soft, relaxed and informal vibe.

Pro tip: Buying flowers that are native to your area and are in season will save you a lot of money.

Once I had an idea of what I wanted, I started to contact florists and wholesalers. Wholesalers are a great idea if you know exactly what you are after, while florists have a great wealth of knowledge to help you out if you need advice. I found a couple of florists who were willing to provide me with the flowers and greenery to do my own arranging, and got to chatting with them about ideas and prices.

Vanessa, of Bridal Bouquets by Vanessa, was so amazingly helpful. She made suggestions based on my inspiration photos, provided me with a list of flowers and prices and was even able to advise me on the amounts I would need. Plus, she offered free delivery!

I decided to use clusters of jars as vases for the tables at the reception – a cluster of three jars at each end of every table, and a rustic wooden box full of jars in the centre. I wanted two ‘focus’ flowers in each cluster, and plenty of fillers. We had 6 tables (not including the bridal table), meaning 12 three-jar clusters and six larger boxes. With that in mind, I ordered (as the accents):

And for the fillers I ordered:

I also ordered two bunches of baby’s breath to decorate the aisle during the ceremony (which was more than enough for 6 small bunches).

The total came to $400, which was amazing, especially considering that the ‘average’ cost of wedding flowers usually clocks in at around $1500 – $2500.

Oh! I should also add that Vanessa also sent us a complimentary bunch of peonies, which we used to decorate our signing table, and later our bridal table! What a gem!
.

Pro tip: Your florist can give you guidance on how much to order, based on the number and size of tables, just as they do when they arrange the flowers themselves. So useful.

As I mentioned above, we used jars to hold our flowers. They were primarily spaghetti sauce jars, but there were also some olives, goats cheese, and capers thrown in there. Maybe even some pickles. We had been collecting them for about a year I would say. My mum was excellent at collecting, all the prettiest shaped jars were from her.

We sourced the wooden boxes from our favourite antique store, Waverley Antique Bazaar. A few days before the wedding, I realised we were a couple short (we’d been planning on using some other boxes, but I didn’t like them in the end). Luckily, my best friend was able to lend us two of her own rustic wooden boxes – what are friends for, right??

The day before we left on our pre-wedding road trip, Mario and I arranged the jars into clusters, cleaned them, glued them together using the hot glue gun, and then tied some decorative twine around each cluster. The reason we decided to glue the jars together was so they could be moved around more easily (a benefit seeing as we had to drive them up to New South Wales, fill them with flowers, and transport them to the wedding venue).

We packed them carefully in boxes for the long drive – no problem. We flinched at every speed bump, but they were fine.

When our flowers were delivered, it looked like there couldn’t possibly be enough. They were packed securely into a box, but once we began to unpack them, it was clear that we had plenty. We filled all the jars with water, and began to cut and arrange the flowers and greenery. I can’t take much credit for how beautiful they looked – it was almost all due to my mum. She has an excellent eye for flower arranging and other artistic endeavours.

Rather than filling all three jars with flowers, we decided (after having already filled them all with water) to put fake tea-lights (which we purchased at the last minute) in the smallest of each trio (are you getting a sense that we were winging it a little bit??). I loved how that looked. 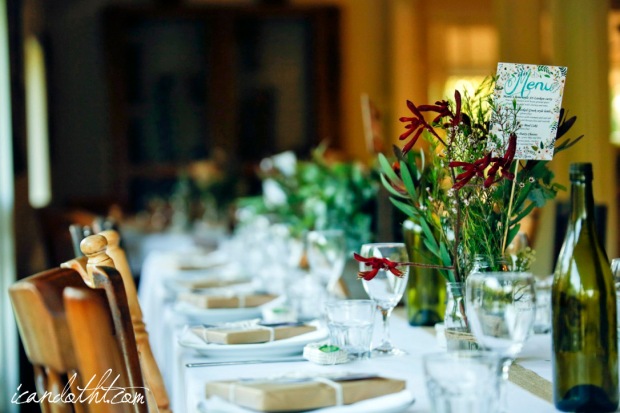 We ran into a slight problem with the jars in the boxes – they tended to overbalance, as the flowers were quite top-heavy. Luckily, Mario and Georgia found a great and easy solution, which leads me to…

Pro Tip: Use rocks or gravel to weigh down your arrangements and stop your vases from falling over.

In the end, we had almost the perfect amount of flowers and filler for our arrangements. A couple were looking a little sparse, so my mum collected some beautiful gum branches from the obliging tree outside our hotel door. If you were really devoted to saving money, you could probably do all your flowers that way…

We dropped our flower arrangements off at the venue, complete with table numbers, menu cards (more on those in the next post) and brief instructions. It’s good to keep it simple (I hope we did!!) when you’re not around to oversee the set up, as you’re more likely to get what you are after, I guess. 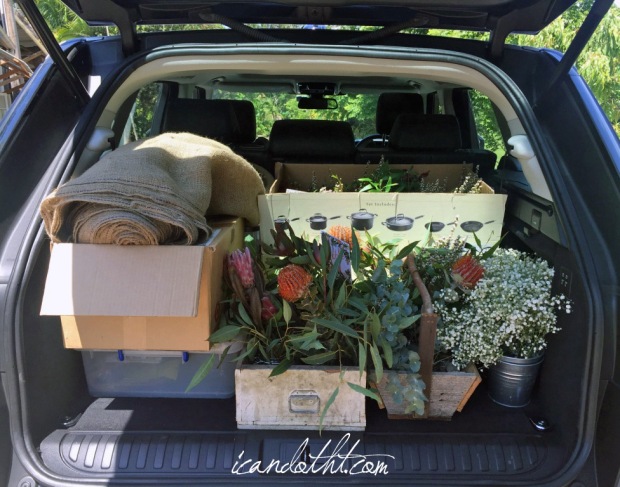 I absolutely loved how the flowers looked on the night. I couldn’t have been any happier – they fit the vibe that I was going for perfectly. We went to pick them up the next morning, but I refused to throw them out – I had a little procession of flowers leading up to the door of our hotel room for days. I may or may not have cried a little when we eventually had to leave them. They were so beautiful.

So that was my experience with my DIY reception flowers. I would day that although it did add a teeny tiny bit of stress, it was totally worth it to (a) save some money and (b) have them looking just exactly how I wanted in every way. I would do it again in a heartbeat (just as long as I had my mum, Mario, Georgia and Vanessa the bridal flower expert to help me!).